I am at war with Japanese beetles, the offspring of last year’s huge and devastating population. This year, I think I’m going to win!

Why? My secret weapon? I am using Surround.

Surround is 95% kaolin clay (5% inert) which is mixed with water and sprayed on plants.

This year, all the blackberries and the blueberries in my yard are wearing coats made

of Surround which I sprayed at the first sign of Japanese Beetles in my back yard.

When I say “first sign” I mean it. Apparently, the beetles release a pheromone when they find good food. Any beetles in the vicinity fly in and start feasting.

Surround doesn’t harm any other insects. But Surround does make berries and leaves taste really bad to the beetles! The proof is on the plants and in the bucket.  This year I have only gotten about 45 beetles, total.

Surround meant fewer than 45 Japanese Beetles in a week!

Last year, I plucked morning and evening, got thousands of Japanese beetles in my bucket and I still lost all the blackberries, beans and apples. The only difference this year is Surround!

Surround also keeps my 10 most hated bugs, including Colorado Potato Beetles, Cucumber and Squash beetles, off of plants so, yes, every squash and cucumber plant in my garden is also sporting a beautiful coat of kaolin clay.

FYI the beetles I have found were on the only 2 plants I didn’t spray with Surround — a Pussy Willow and Borage, which I planted for the bees. 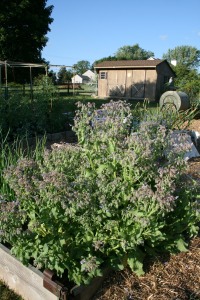 Borage is one plant I didn’t spray!

Based on my current state, which is only one week into beetle season, I may win the war this year.

If I do, I give all the credit to Surround. If you’re being “bugged,” consider giving it a try.